Ministry of Primary Industries have been investigating the detection of suspected myrtle rust fungal infection in a number of trees on Raoul Island.

Unfortunately their laboratory has now confirmed that myrtle rust (Puccinia psidii) is the fungal infection found in a small number of Kermadec pohutukawa trees on the island.

Myrtle rust, also known as guava rust and eucalyptus rust, is a fungal infection that can have serious impacts on a wide range of plants in the myrtle family. If it were to enter mainland New Zealand it could potentially harm iconic New Zealand plants pohutukawa, kanuka, manuka and rata, as well as commercially-grown exotic species such as eucalyptus, guava and feijoa.

That said, it is early days and, as yet, we know little about the particular type of myrtle rust found on Raoul Island, or how it would act in New Zealand conditions and on New Zealand myrtle species, should it get here.

Raoul Island, is very remote from mainland New Zealand – over one thousand kilometres to the northeast of Northland. Access to the island is strictly controlled and only by permit. Those visiting Raoul Island are mainly scientists and maintenance people, with most working for DOC.

It was DOC staff that discovered the small number of affected trees and safely transported samples back to New Zealand for testing, following strict biosecurity protocols.

MPI’s focus right now is to do what they can to assess the situation, protect the unique Raoul Island ecosystem and prevent the further spread of the fungus to mainland New Zealand.

Currently they are urgently assessing the options available. Given the remoteness of the outbreak and that fact that rust diseases are notoriously difficult to control, this is going to be a challenge.

Strict precautions are being taken to make sure people, equipment and samples being brought back to mainland New Zealand pose no risk of transmitting infection.

New Zealand already has stringent biosecurity measures to protect against myrtle rust introduction, including a complete ban on imports of cut flowers and foliage from myrtle species from New South Wales, Queensland and Victoria. Myrtle rust is well established along the eastern seaboard of Australia and in New Caledonia.

Myrtle rust spores can, however, spread long distances on the wind and the Raoul Island incident is an important and timely reminder that it could reach the New Zealand mainland at some time in the future. Early detection of it would be vital to any attempt to control it.

Myrtle rust most typically appears as bright yellow powdery eruptions on leaves. Leaves can become buckled or twist and die off.

If you believe you have seen myrtle rust on plants in New Zealand, immediately call MPI on 0800 80 99 66. Do not attempt to collect samples as this may aid in the spread of the disease.

Full information is at: www.mpi.govt.nz/document-vault/3641 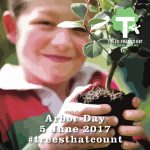 Kiwis Challenged to Plant a Native Tree on Arbor DayNews 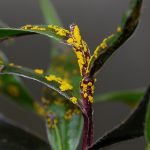