Trustee Ruud Kleinpaste was invited to deliver a keynote address at the 24th Annual Hawai’i Conservation Conference in Honolulu earlier in July. He also conducted an environmental education workshop for a small crowd of 50 attendees. The conference was attended by 1200 scientists, volunteers, students and Government officials and it focused on a wide range of topics.

Hawai’i is quite comparable with New Zealand: typical of an island nation, it shows high percentages of endemism and is plagued by many invasive species, non-native predators and weeds. As a result the impact on vulnerable native species is enormous; many birds are critically endangered.

There were many sessions in the conference dealing with ROD (rapid ōhi’a death), a debilitating disease that has killed vast numbers of ōhi’a, a local Hawai’ian Metrosideros species (polymorpha). In fact, on the Island of Hawai’i, Ruud encountered many ōhi’a forests in serious decline.

ROD is a far more devastating problem than the strain of myrtle rust that became established in Hawai’i in 2005. The rust relatively rarely attacks Metrosideros and appears to be causing far more problems on the endemic and endangered Eugenia koolauensis and the introduced rose apple Syzygium.

However, our myrtle rust strain could well prove to be a lot more aggressive on Metrosideros – no doubt time will tell.

Rapid ‘ōhi’a death seems to be caused by two separate strains of the Ceratocystis fungus and scientists are still unsure how it got to the big island of Hawai’i. It appears to have been present from 2010, but only identified since 2014. The fungus enters the sapwood and blocks the movement of fluids. There is debate on whether the activity of bark beetles is responsible for the spread from tree to tree. One thing has become quite clear: wounded/damaged trees (through mowing, weed-trimmers, pruning, etc.) are far more susceptible to infection than healthy and younger specimens. The fungus does not have wind-blown spores, but wind-blown and contaminated, fine sawdust may be a source of infection.

One thing is for sure: Ceratocystis could well be a much more devastating disease of our pohutukawa and rata; something we really don’t want at all! 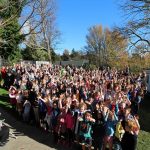 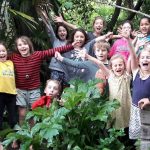